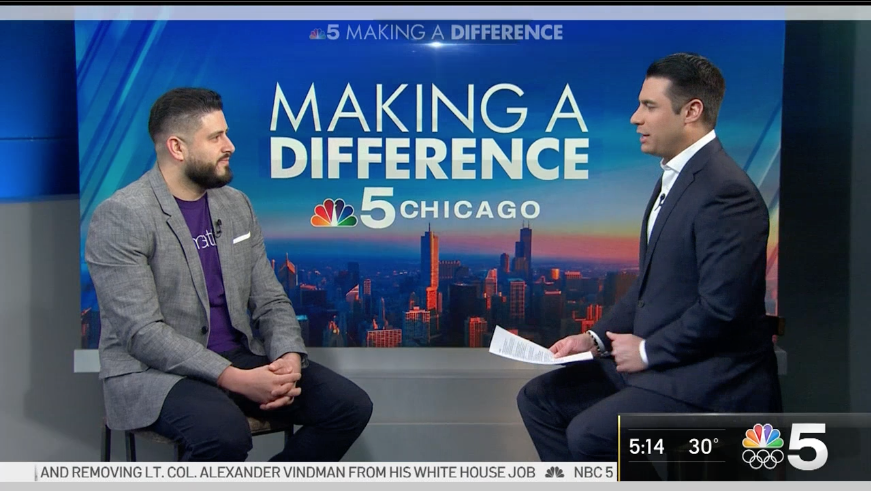 After School Matters’ Senior Program Director, Tony Diaz, sits down with NBC 5’s Alex Maragos on their “Making a Difference” segment to talk about After… More ›

Gately Fieldhouse will be the final site of the Mayor’s ChiFastest Race to Gately on July 10.

In addition to supporting and developing Chicago’s aspiring athletes, the completed Indoor Track and Field at Gately Park will continue the community’s economic revitalization journey that will attract new residents, businesses, and visitors.

“Keeping our city’s youth active, engaged, and connected to opportunities to socialize with peers is critical for both their short- and long-term success,” said Mayor Lightfoot. “This indoor track and field space will serve as our young people’s newest outlet that will help them bounce back from the pandemic and nurture their mental, physical and emotional wellbeing. Combined with the positive impacts of our ongoing INVEST South/West initiative, this space will also provide children and teens from some of our most underserved communities with the enriching summer programming and opportunities they need now more than ever.”

The Indoor Track and Field at Gately Park

“The Indoor Track and Field at Gately Park is truly a game-changer for the Pullman and Roseland communities, and the city, but more importantly, Chicago’s young track and field talent who are waiting to be developed,” said Chicago Park District General Superintendent and CEO Michael Kelly. “This facility helps ensure our young athletes have access to resources that will allow them to compete with others across the country for scholarships and other opportunities that track and field create.”

In addition to the indoor track and courts, the facility features a state-of-the-art fitness center, family restrooms, and locker rooms. The multipurpose rooms house a variety of activities from arts and crafts and painting to workshops and lectures.

A kitchenette helps staff with lunch and snack distribution during camp and other programs. The building can easily host more than 700 patrons for non-track & field events. In addition to sporting events and programs, non-sport events can be held throughout the year. To accommodate this need, 70,000 square feet of usable space, which can be programmed for non-sporting events.

After School Matters at Gately Park

After School Matters occupies 24,000 square feet on two floors in the west wing of the new structure. This new programming facility is now one of three After School Matters buildings in Chicago in which the entire space is designed for and dedicated to Chicago teens exploring their interests and developing their talents. Designed by the architectural firm, Eckenhoff Saunders, the space features art and dance studios, music and recording rooms, a full culinary kitchen, tech labs with 3D printers, a rooftop garden, and other safe and supportive spaces where teens can learn, grow, and just be themselves. At full capacity, over 1,500 teens can participate in After School Matters programs in the space.

The opening of the new After School Matters at Gately Park comes as the organization celebrates an important milestone – its 30th year providing life-changing programs that empower Chicago teens to shape their futures. Started in 1991, on an empty lot in the Loop, After School Matters is now the nation’s largest and most successful provider of after-school and summer programs for high schoolers, serving 20,000 teens this year.

“For 30 years, Chicago teens have been at the center of After School Matters,” said After School Matters CEO Mary Ellen Caron. “We wholeheartedly believe that they are our city’s greatest asset and deserve our attention and resources. This new building is more than just bricks and mortar – it is an important investment in the youth of this community. It sends an important message to teens in Chicago, that they matter and their futures matter.”

The new Gately Park facility, which is pursuing LEED certification, will be both a world-class sports complex and a year-round community center for wellness, culture, and out-of-school programming. Current offerings include day camp, basketball, volleyball, ballet, Track and Field 101 and Advanced Track and Field. On July 10, Gately will host the culmination of “The Fastest Kid in Chicago”, a joint effort between Mayor Lightfoot, Reverend Jesse Jackson, the Chicago Park District, and Chicago Public Schools. Runners, 1st to 12th grade were invited to participate. Students in 5th to 12th grade who qualified in preliminary 60-meter races held across the city will compete in the final race.

The vision to build the Gately Indoor Track and Field began more than 30 years ago. And after decades of advocacy, the City of Chicago, Chicago Park District, and After School Matters joined long-time supporters, athletes, and the community to break ground on the facility in August 2018. Construction was completed in April 2020, though the opening was delayed due to the pandemic.

The $56.9 million facility was funded by the State of Illinois, City of Chicago, Chicago Park District, Exelon, and generous donations from the Hobson/Lucas Family Foundation, The Crown Family, Fifth Third Foundation, Lisa W. Wardell, and the Harry and Jeanette Weinberg Foundation on behalf of After School Matters.

About the Chicago Park District

The Chicago Park District has served Chicago residents for more than 85 years. It is a Gold Medal Award-winning organization, which recognizes excellence in park and recreation management across the nation. For more information about the Chicago Park District’s more than 8,800 acres of parkland, more than 600 parks, 26 miles of lakefront, 12 museums, two world-class conservatories, 16 historic lagoons, nearly 50 nature areas, thousands of special events, sports and entertainment programs, please visit www.chicagoparkdistrict.com or contact the Chicago Park District at 312/742.PLAY or 312/747.2001 (TTY). Want to share your talent? Volunteer in the parks by calling, 312/742.PLAY. Follow us at facebook/chicagoparkdistrict, on Instagram/chicagoparks and on Twitter @chicagoparks.

Celebrating its 30th year in 2021, After School Matters is a nonprofit organization that provides after-school and summer opportunities to Chicago public high school teens to explore their passions and develop their talents, while gaining critical skills for work, college, and beyond. After School Matters programs are project-based, led by industry experts, and provide a pathway to progress in skills development and independence. Teens earn a stipend while participating in programs in the arts, communications and leadership, sports, and STEM (science, technology, engineering, and mathematics). Over the span of three decades, After School Matters has engaged more than 350,000 teens throughout the city of Chicago. www.afterschoolmatters.org